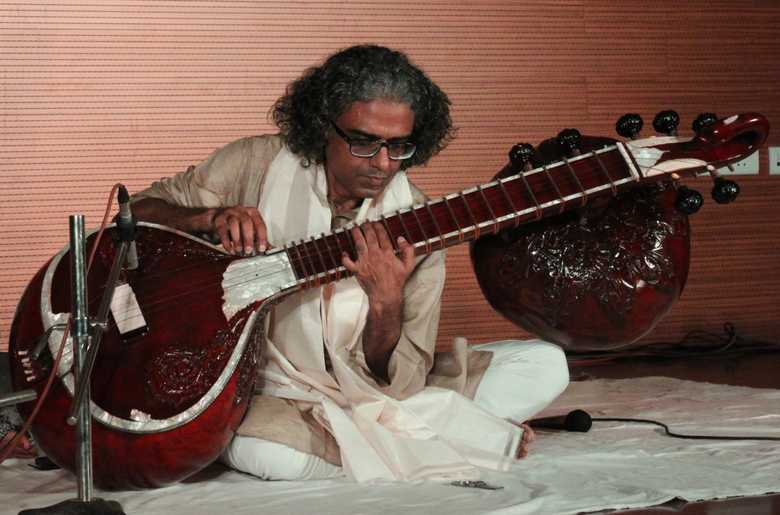 Namaste. I am Balachander, an Indian classical musician, and a performing artist of Chandraveena. Chandraveena is a contemporary string instrument, designed and built to express my musical identity.

Here is a downloadable biography, if you are looking for one. If you would like to get in touch with me, please leave me a note. If you like my music, learn how you can support me in my continued endeavour to produce good music. Your feedback and patronage is very valuable to me.

Before I reached this stage where I can express my music on Chandraveena, much has happened which has contributed to my musical style and thinking process. This is the story of my Musical Journey.

I was born into a family of academicians and music lovers. Even though my parents were not trained musicians, there was always music playing at home. This marked my formative years. I received early training in Carnatic Music, the Indian Music of the South. Growing up, my initial training along with exposure to traditional folk music, temple chants and North Indian Music, helped me develop a broader perspective on Indian culture.

My formal training in Music was in Sarod, under Pandit Pradeep Barot. Along the way, I met the legendary Rudra Veena maestro, Ustad Zia Mohiuddin Dagar. His artistry and approach to music, inspired me to go deeper into music. After his early demise in 1990, I undertook rigorous training in music, under the renowned Dhrupad vocalist, Ustad Zia Fariduddin Dagar who continued to mentor and teach me, till his demise in 2013.

Designing and Playing the Chandraveena

Since I was trained on Sarod, Ustad Z. F. Dagar had the idea that one day I should play the combination of Sarod and Sursringar. However, at some point in my musical conversations, he felt I should rather try playing Saraswati Veena (due to my early training in Carnatic music). So, under the advise of Ustadji, in 2002, I undertook a research project to use acoustic principles, to modify and redesign the Saraswati Veena, to suit the style of Dhrupad. This research project was awarded a Junior Research Fellowship by the Ministry of Culture, Government of India, for the period 2004–2006. Officially titled “North Meets South: Dhrupad on Saraswati Veena”, I completed the project in 2007, and the new Veena was named “Chandraveena” by Ustadji. You can read more about the journey leading to Chandraveena and the story of its making.

Since 2007, I have been extensively touring and performing on Chandraveena, and at the same time, working on further improving the acoustics and responsiveness of the instrument. The instrument and my thought process have mutually influenced one another, resulting in an evolving amalgamated style - a natural blend of Carnatic and Dhrupad (Dagar) styles rooted in the principles of Indian Raga system. This musical style is highly introspective and meditative in nature, keeping in consonance with the philosophy of Maarga Sangeet.

My interest in academics, history and musicology has led me to give many lecture demonstrations and talks on Indian Music, and on the Acoustics of Indian Musical Instruments. I also undertook an effort towards the preservation of the Sursringar (https://www.sursringar.org), an instrument I was initially supposed to play. Sursringar is a rare and beautiful bass instrument which was often played alongside Rudra Veena, in the past. To continue the musical legacy forward, I also teach vocal and instrumental Indian classical music in the traditional style. Check out my blog posts related to Indian music.

Alongside music, I completed an M.Sc in Physics from St. Xaviers’ College, Mumbai and a Diploma in Computer Science from NCST, Mumbai. Having held various senior management positions in my corporate career, I took a sabbatical in pursuit of music. Over the years, I have worked as a consultant to a number of organisations, while continuing to pursue music as a performing artist.

I am deeply indebted to my musical gurus who have been mentors and guiding spirits both in life and in music.

Pandit Pradeep Barot, a renowned sarod player and a humble human being, was my first Guru. He taught me all the techniques of Sarod playing and music. In the early days of my musical journey, when I was not in a position to own a Sarod, he very kindly lent his own Sarod for my practice. For this generous gesture and, for teaching and sharing his music, I will always be grateful to him. Read more about Pandit Pradeep Barot.

Meeting Ustad Zia Mohiuddin Dagar was a paradigm shift in my musical journey. His deep understanding of music, his kindness and ability to explain and express the most subtle of musical expressions touched me to the core. Over time, he became my Idol - the man and his music that I wished to emulate. Over a few years of our sporadic meetings, we often had discussions on Indian music of all forms, including Hindustani and Carnatic. These discussions, and his thoughts and approach to music have stayed with me and have been my guiding principle in my approach to music. His unfortunate passing away at an early age, and in the early years of my journey created a vacuum, and also changed my musical journey with many twists and turns. Today, as a performing Veena musician, I look back with veneration and gratitude for his role in shaping my music. Read more about Ustad Zia Mohiuddin Dagar.

The vacuum created by the early passing away of Ustad Zia Mohiuddin Dagar was filled by the presence of his brother, the legendary vocalist Ustad Zia Fariduddin Dagar. Gradually, I picked up the pieces from where I had left off, and under his constant guidance and training, my musical understanding started maturing.

His booming voice, the richness of his singing, his deep understanding and approach to music and life, our all night conversations on music and history and his fondness for delicacy cooking have all left an indelible mark on me. He became a life changing mentor and a father figure in my life till the end. And even after his demise, I carry his thoughts and principles in my heart. I am truly indebted and grateful to him, for the knowledge he bestowed on me. Read more about Ustad Zia Fariduddin Dagar.

My musical endeavours would not have been possible without the support of so many wonderful people. Please do visit the acknowledgments to learn more.

It would not have been possible to bring Chandraveena Music to all of you without the support of so many amazing technologies. Please visit the Technology Credits to learn more.