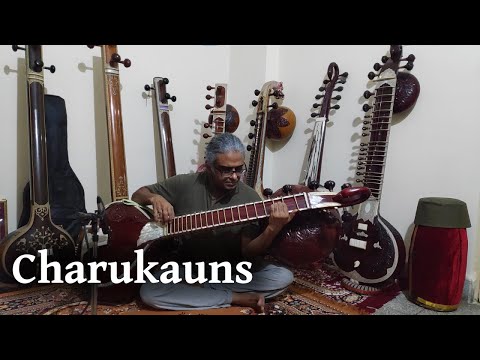 A fundamental and important concept in Indian Classical Music is the distinction between:

While a scale is represented by a collection of consonant notes, a Raga derived from a scale is defined by its grammar and aesthetic characteristics, known as Lakshanas and Lakshyas.

When I sat down for this recording session, I felt inspired by the rendering of Raga Ragavardhani by Ustad Zia Mohiuddin Dagar (on Rudra Veena). Raga Ragavardhani, also the 32nd Melakarta scale, is a Sampoorna Raga. Its scale is Sa ga Ga ma Pa dha ni. However, in this rendition, Dagar Saheb approaches the Raga in the style of Raga Kaushiki.

The scale of Raga Charukesi, the 26th Melakarta, is Sa Re Ga ma Pa dha ni. In this rendition, I have used the scale of Raga Charukesi, but approached it in the style of Raga Kaushiki and Raga Panchamkauns. At the end of the recording, I had not yet formed an identity or name for the Raga. On further inspection, I found a recording of Pandit Ravi Shankar on Sitar taking a similar approach to this scale, and he had named it Raga Charukauns. As a mark of respect to this great musician, I have retained the name as Raga Charukauns.

I present Raga Alapana in 3 parts - Alap, Jod and Jhala, also known as Alapana and Tanam.

Vakra Raga - A Janya (derivative) Raga of a Melakarta (parent scale) in which phrases are taken in a zig zag fashion.

Vikrit Raga - A Janya (derivative) Raga in which a modified note is used from a family scale. In this case, ga (komal ga) from Kaushiki is modified to Ga (Tivra Ga).

The full video recording of the Raga Alapana is available at https://www.youtube.com/watch?v=TsspJ_StQ8M.

Purchase CD quality audio of the performance from https://chandraveena.bandcamp.com/album/raga-charukauns.

If you like the music, learn how you can support Chandraveena music. We value your patronage.
Previous
◀︎ Raga Alapana - A glimpse into its structure
Next
Veena and Vani - An Ancient Tradition ►
Share via