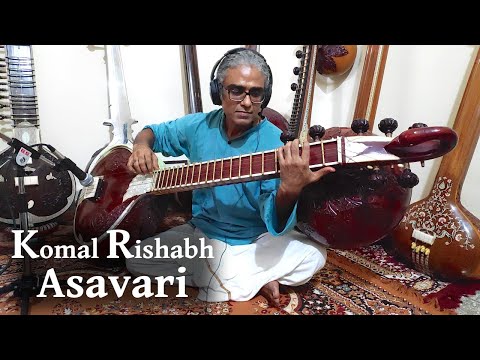 Raga Asavari is an ancient scale. It is what we call an Audav (pentatonic) - Sampoorna (literally “complete” or heptatonic) Vakra Raga (read the notes below for more information). It used to be popular until the advent of a new creation, Raga Jaunpuri which I covered earlier.

Interestingly, there is a scale called Asaveri, a thematic variation on Saveri. This Raga has the same scale as Komal Rishabh Asavari. Note that Asavari is pronounced आसाावरी (aah-saa-vuh-ree) while Asaveri is pronounced असावेरी (uh-saa-vay-ree).

Here, I present a detailed Alap in Raga Komal Rishabh Asavari consisting of three sections - Alap, Jod and Jhala. This alap performance is accompanied by a very unique drone (Tanpura) accompaniment track. This drone track is synthesized from a project called PureTones. It has been microtonally adjusted to precisely suit the scale of the Raga. It was a different and interesting experience for me. Do try and hear the difference. If it sounds interesting to you, be sure to check out PureTones. You can also hear a synthesized signature tune of Komal Rishabh Asavari which goes along with the PureTones drone track.

A vikrit raga is a derived scale from a Melakarta in which a note has been modified. In this case, Tivra Rishabh of Melakarta Natabhairavi has been flattened to Komal Rishabh, hence also the name Komal Rishabh Asavari.

Even though scales in Indian Classical music are defined by a set of ascending - descending notes, sometimes, a Raga has a zig-zag melodic approach. Such Ragas are called Vakra Ragas. The scale of Raga Komal Rishabh Asavari is generally taken as Sa re ma Pa dha SA while ascending, and SA ni dha Pa ma ga re Sa while descending.

The full video recording of this performance is available at https://youtu.be/ElDf4Mxs7tA.

Snippets from this performance are available at https://youtu.be/dPahp2X5VR0.

Purchase CD quality audio of the performance from https://chandraveena.bandcamp.com/album/raga-komal-rishabh-asavari.

If you like the music, learn how you can support Chandraveena music. We value your patronage.
Previous
◀︎ Raga Patdeep - Alapana and Pallavi
Next
Raga Megh - Song of the Clouds ►
Share via