Raga Yaman - a duet in a former foreign Raga! 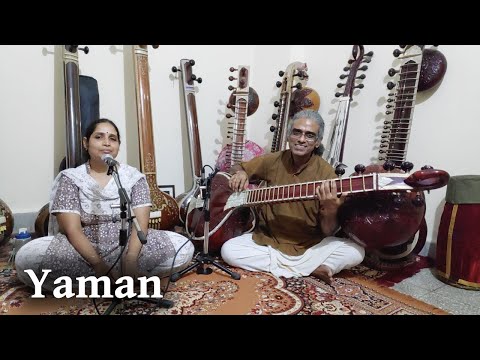 In Indian Classical music, वीणा (Veena), वाणी (Voice) and वेणु (Bamboo flute) represent a time honoured trinity of mediums for performing music. A Veena is a sensitive instrument capable of creating the most subtle of intonations, called microtones. Till recent times, many vocalists were trained to sing with the Veena, so that they could be pitch perfect and were able to master microtones. To learn more about this fascinating topic, read my post on Bhimpalasi where we present Veena and Vani in Bhimpalasi accompanied by Pakhawaj.

In this session, we present a Chandraveena - Vocal duet in Raga Yaman featuring a detailed Raga Alapana consisting of Alap and Jod, also known as Alapana and Tanam. We are pleased to feature Aparna Shastri on vocals. She is a trained vocalist under master vocalist late Ustad Zia Fariduddin Dagar. She has also received guidance from Pandit Uday Bhawalkar and Ustad Mohi Bahauddin Dagar.

A few words on Raga Yaman

Time and again, we have talked about the evolution of Indian classical music in different contexts. Here, I would like to share my observations on Raga Yaman, also known as Raga Kalyani. Let us first look at the basic scale of the Raga. Please refer to the Program Notes below for the notation.

In Indian musical tradition, many Ragas evolved from the Jati-Murchhana system. To put it simply, this can be understood as a system involving changes of modes/scales. The scale of Yaman as described above can be got from an ancient Indian scale - Shadaj Gram - by simply moving the Graha (home note or starting note) to Gandhar of Shadaj Gram. This scale is also similar to the Greek/Western mode called the Lydian mode.

However, there is not much mention of this scale in the Indian musical tradition till the 15th or 16th century. In some scriptures of the South, as late as 18th century, Kalyani scale has been classified as a Desya Raga (meaning, a foreign Raga)! Desya Ragas, though recognised, did not have a pride of place in the musical system, and were not recommended for extended rendition. Another example of an old Desya Raga is Todi.

Having said that though, over the last 100-150 years, Todi and Kalyani have become an integral part of South Indian music, so much so that one cannot imagine a Carnatic Kutcheri without Kalyani or Todi! In fact, extensive Alapanas with Ragam, Tanam and Pallavi are often rendered in Todi and Kalyani. Some musicians were even honored with the Raga name for their mastery! For example, Todi Sitaramayya was renowned for his rendering of Todi, and so was the great Nadaswaram Vidwan T. N. Rajarathnam Pillai.

A last point: there are some schools of thought which believe that Yaman and Yaman Kalyan are two different Ragas, based on the use of Shuddha or Komal Madhyama in the latter. I beg to differ. As a Lakshya (aesthetic choice), artists can and have used Shuddha/Komal Madhyama for ati-shringar. What does this mean? Shringar is embellishment or ornamentation, and Ati-shringar is very subtle ornamentation. The usage of Shuddha Madhyama as an ati-shringar is not sufficient to make the Raga a different one.

Raga Alapana is an improvisation and a systematic presentation of a Raga. This part has no rhythmic accompaniment. This has three parts - Alap, Jod and Jhala. Here only Alap and Jod are presented. This format is also known as Ragam and Tanam.

The full video recording of this performance is available at https://youtu.be/e1Wf_nWS47I.

Purchase CD quality audio of the performance from https://chandraveena.bandcamp.com/album/veena-and-vani-raga-yaman.

If you like the music, learn how you can support Chandraveena music. We value your patronage.
Previous
◀︎ Raga Puriya
Next
Raga Bilaskhani Todi - a tribute to Tansen! ►
Share via