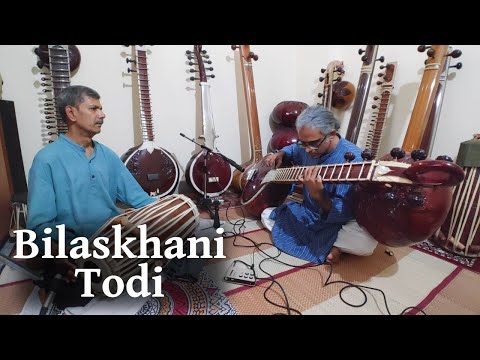 Bilas Khan, an acclaimed singer, son and disciple of the legendary Tansen, is often credited as the creator of the Raga Bilaskhani Todi. The story goes that when Tansen died, Bilas Khan sang this Raga so emotionally and beautifully that Tansen stirred! And it came to be called Bilaskhani Todi.

Let us first look at the basic scale of the Raga. Please refer to the Program Notes below for the notation.

Now for the facts. As per most records, Tansen died in 1586. Indian musical system was highly evolved by then. We already had a sophisticated Jati-Murchhana system of music, through which many jatis (modern day Raga equivalents) were created. The scale of Bilaskhani Todi is the first Murchhana of Shadaj Gram. In other words, it can be derived by simply moving the Graha Swara (home note or starting note) to the Rishabh of Shadaj Gram. This murchhana, “Re ga ma Pa Dha ni Sa Re”, when moved to Sa becomes “Sa re ga ma Pa dha ni”. It seems highly unlikely to me that this scale was new to the Indian musical system at that time.

In my understanding, what could have possibly happened is the following. Bilas Khan was definitely a very acclaimed musician, and it is possible that on his father’s death, he did sing a very moving Todi. As a mark of honour to his singing, the Raga started to be called Bilaskhani Todi.

This scale is one of the desya ragas mentioned in Southern India literature of 17th century, and has always been just called Todi. The melakarta name for nomenclature purposes is called Hanumatodi.

Pallavi is a melodic phrase or lyrics set to a fixed set of beats in a rhythmic cycle. The improvisation here is creating interesting rhythm based melodic patterns while maintaining the framework of the Raga. This part of the performance is accompanied by Pakhawaj.

The full video recording of this performance is available at https://youtu.be/SGNUq_OJjaU.

Purchase CD quality audio of the performance from https://chandraveena.bandcamp.com/album/indian-classical-raga-bilaskhani-todi.

If you like the music, learn how you can support Chandraveena music. We value your patronage.
Previous
◀︎ Raga Yaman - a duet in a former foreign Raga!
Next
Raga Kaushika Dhwani - a spring time Raga? ►
Share via