Raga Hindol - Song of the Dawn 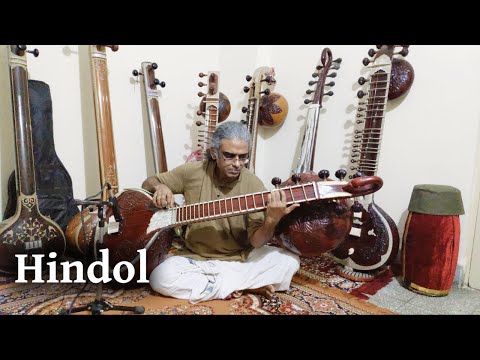 There are many systems of Raga classifcation in Indian Classical Music, notably, Raga - Ragini, Melakarta, Janaka - Janya and Thaat. These different systems enable a musician to understand the melodic structure of a Raga based on its heritage and association with other Ragas. In addition to these relationships, each Raga also has its unique identity which is formalised according to its Lakshanas and Lakshyas.

Raga Hindol is one of the principal Ragas in the Raga-Ragini system. This system groups Ragas as masculine (Raga) and their feminine counterparts (Ragini). It is one of the oldest systems of classification, and it has some variations. In the version I am familiar with, the following six Ragas are regarded as the principal Ragas: Bhairav, Hindol, Shree, Megh, Deepak and Malkauns. There is also a symbolic association here to Indian deities. Specifically, some say that the first 5 Ragas came from Lord Shiva, and the sixth, Raga Malkauns, from Goddess Parvati.

Raga Hindol is one of the few morning Ragas which uses Tivra Madhyam (Augmented Fourth). Generally, Tivra Madhyam Ragas are late afternoon or early evening Ragas as per the Prahar (time of day) system in Indian classical music.

Let us now look at the scale of the Raga (refer to the Program Notes below for the notation).

As you can see, it is a Pancham Varjit (Fifth is dropped), Audava (Pentatonic) Raga. In terms of Lakshana, Ga is considered the anchor note for graha, amsa and nyasa. There is symmetry in the phrases/intervals Ma-Dha and Dha-Sa. Ni is used as a Hrasva (short note).

In keeping with the spirit of this Raga, we did the recording early morning. As the music progresses, you can hear the chirps of the early dawn birds! Enjoy the Music!

Purchase CD quality audio of the performance from https://chandraveena.bandcamp.com/album/raga-hindol.

If you like the music, learn how you can support Chandraveena music. We value your patronage.
Previous
◀︎ Raga Shankarabharanam - Raga of the dancing Lord Shiva!
Next
Raga Bihag with Two Madhyams ►
Share via