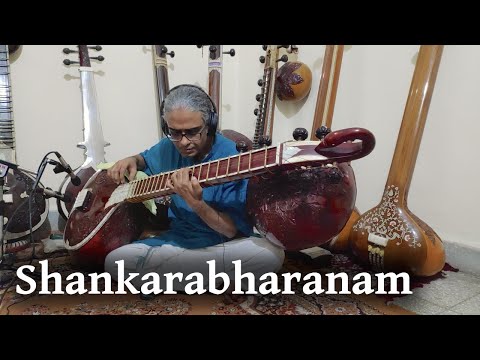 Raga Shankarabharanam has been described by Somanatha (a 17th century musicologist) as Lord Shiva himself dancing, clad in red silk, ashes on his forehead and lotus garlands round his neck. Shankara Aabharana literally means embellishments of Shankara - another name for Lord Shiva. So much for mythology. Let us now turn to look at the scale of the Raga (refer to the Program Notes below for the notation).

It is one of the oldest scales in Indian classical music. It probably originated from the sophisticated Jati-Murchhana system of music, through which many jatis (modern day Raga equivalents) were created. Some scholars believe that the scale of Shankarabharanam has originated from the Nishad Murchhana of Shadaj Gram. In other words, it can be derived by moving the Graha Swara (home note or starting note) to the Nishad of Shadaj Gram. This murchhana, “ni Sa Re ga ma Pa Dha”, when moved to Sa becomes “Sa Re Ga ma Pa Dha Ni”.

Raga Shankarabharanam is the 29th Melakarta in the 72 Melkarta system of Raga Classification. It is also commonly called Raga Bilawal, especially in North India. However, the origin of the name Bilawal and its musical lineage are not very clear. To the best of my quest, I have not found the name Bilawal mentioned in any of the early scriptures on Indian music. However, there is a scale mentioned called Velavali. Some scholars are of the opinion that Bilawal is Velavali.

This kind of a distortion or aberration of the term is quite possible. India is a vast country with a diverse culture and languages. In some parts of Indian, व (Va) and ब (Ba) are used interchangeably. For instance, in parts of India वीणा (Veena) and बीना (Beena) are used to mean the same instrument. The latter term has eventually has turned into बीन (Been) which today means the Rudra Veena. So, perhaps due to regional eccentricities, Velavali may have become Bilawal. But, as of now, I do not have enough information on the scale of Velavali to say for sure. When I do have more information, I will update the post.

In terms of Lakshya, Ga is considered the most powerful note for graha, amsa and nyasa. Dha is generally not used as a plain note but as a deergha kampita note (for e.g., as a Dha-Ni-Dha phrase). The note ma has two shades, based on whether ma is part of a phrase starting from Dha or from Ga.

The association of this Raga with Lord Shiva lends it a certain grandeur, which is also aided in no small measure, by its musical structure. In keeping with the grandness of this Raga, I present a detailed Alap in Raga Shankarabharanam. This recording uses a specially developed drone, called the PureTones Drone. Enjoy the music.

Purchase CD quality audio of the performance from https://chandraveena.bandcamp.com/album/raga-shankarabharanam.

If you like the music, learn how you can support Chandraveena music. We value your patronage.
Previous
◀︎ Raga Gurjari Todi - a jod Raga?
Next
Raga Hindol - Song of the Dawn ►
Share via