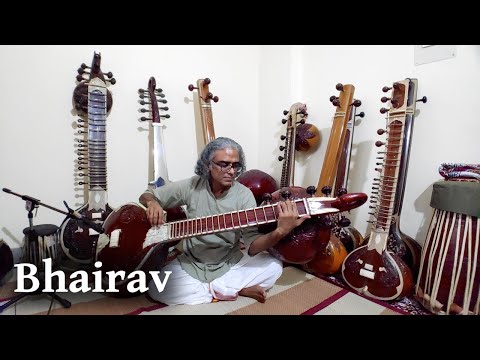 There are many systems of Raga classifcation in Indian Classical Music including Raga - Ragini, Melakarta, Janaka - Janya, and Thaat. These different systems enable a musician to understand the melodic structure of a Raga based on its heritage and association with other Ragas. The Raga-Ragini system of classification is one of the oldest systems. This system is generally regarded as consisting of six principal Ragas, namely, Bhairav, Hindol, Shree, Megh, Deepak and Malkauns.

Raga Bhairav is considered to be an Aadi Raga or a heritage Raga as it is one of the oldest Ragas in Indian Classical Music. The six principal Ragas also have a symbolic association to Indian deities. Raga Bhairav is associated with the Bhairavnath avatar of Lord Shiva.

In this presentation of Raga Bhairav on Chandraveena, I explore the Raga in Alap, Jod and Jhala. This Raga is also known by the name Malavagaula in Mela system or Mayamalavagaula (15th Melakarta) in the 72 Melakarta System of Raga Classification by Venkatmakhin.

Raga Alapana is an improvisation and a systematic presentation of a Raga. Usually, it has three parts - Alap, Jod and Jhala. This format is also known as Ragam and Tanam. Raga Alapana generally has no rhythmic accompaniment, but occasionally, we perform Jod or Jhala or both to the accompaniment of a percussion instrument.

Note the symmetry in the scale. In Indian Classical Music, symmetry around Madhyam or Pancham has always been considered as an important attribute of a Raga. If you take Bhairav, you can see the symmetry between Purvanga (first part of the Octave) and Uttarang (second part of the Octave). Specifically, the note intervals between Sa re Ga are identical to those between Pa dha Ni.

Purchase CD quality audio of the performance from https://chandraveena.bandcamp.com/album/raga-bhairav.

If you like the music, learn how you can support Chandraveena music. We value your patronage.
Previous
◀︎ Raga Bihag with Two Madhyams
Next
Veena and Vani - A musical conversation in Raga Shuddha Sarang ►
Share via