Veena and Vani - A musical conversation in Raga Shuddha Sarang 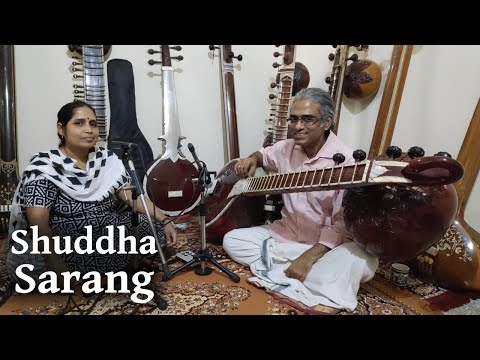 Indian Classical music has a time-honoured tradition of vocals and veena performing together. You may have already read about it during our earlier presentation of Veena-Vani duet in Raga Bhimpalasi.

It has been said that an Indian Classical musician’s training is complete when as a vocalist they are trained on a veena, or as a Vainika (veena player) they are trained in vocals. In other words, a vocalist ought to imbibe the best practices of Tantrakari (instrumental traits) in their voice, and a Vainika ought to imbibe the best practices of Gayaki (vocal traits) on Veena. While this practice used to be common across Indian traditions, only a few schools of music in Dhrupad still follow it.

In this session, we present a Chandraveena - Vocal duet in Raga Shuddha Sarang. We present a Raga Alapana, consisting of Alap and Jod, also known as Alapana and Tanam.

We are pleased to feature Aparna Shastri on vocals. She is a trained vocalist under master vocalist late Ustad Zia Fariduddin Dagar. She has also received guidance from Pandit Uday Bhawalkar and Ustad Mohi Bahauddin Dagar.

As two musicians trained in the same school of music, we understand the structure and the flow of music so as to present a unified music - rather than as two musicians presenting independent versions of the Raga. Another point to note is that as a Vainika performing with a Vocalist, I have to adapt to the singing style so that we complement each other.

To contrast this, you can also hear my solo version of Raga Shuddha Sarang. While you will find similarities in the structure of the presentation, as a soloist, I can take full advantage of the range of my instrument, and every instrumental technique available to me.

However, here, we feed off each other ideas, pick up from where the other leaves, completing their phrases and so on. It is meant to be a Sangeet Samvad (a musical conversation). Hope we have captured the true spirit of a duet. Enjoy the music!

A Janya (or derivative) Raga of a Melakarta which uses a note outside of the Melakarta notes. In this raga, ma (Komal Madhyam) is outside of Kalyani (Sa Re Ga Ma Pa Dha Ni).

A Varjita Raga of a Melakarta drops one or more notes from the parent scale. In this case, Ga is dropped from the original scale.

A Janya Raga is a derivative Raga from a parent Melakarta scale. The Janya Raga could be Audav (pentatonic), Shadav (hexatonic) or Sampoorna (heptatonic).

Purchase CD quality audio of the performance from https://chandraveena.bandcamp.com/album/a-duet-in-raga-shuddha-sarang.

If you like the music, learn how you can support Chandraveena music. We value your patronage.
Previous
◀︎ Raga Bhairav - a Heritage Raga
Next
Raga Hamsadhwani - Raga of the North and South ►
Share via