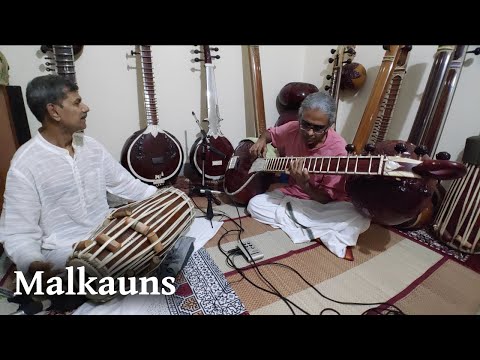 There are many systems of Raga classifcation in Indian Classical Music including Raga - Ragini, Melakarta, Janaka - Janya, Thaat, etc. These different systems enable a musician to understand the melodic structure of a Raga based on its heritage and association with other Ragas.

The Raga-Ragini system of classification is one of the oldest systems. This system is generally regarded as consisting of six principal Ragas, namely, Bhairav, Hindol, Shree, Megh, Deepak and Malkauns. There is also a symbolic association here to Indian deities. Specifically, some say that the first 5 Ragas came from Lord Shiva, and the sixth, Raga Malkauns, from Goddess Parvati. It is believed to have been created by Goddess Parvati to calm down Lord Shiva after his Tandava dance!

It is also likely that Malkauns or Malkosh is a spelling variation of an ancient Jati Raga called Malava Kaushiki. Independent of its origin or the mythology, Raga Malkauns is a grand and beautiful Raga. It is generally considered a calming Raga.

The scale of Raga Malkauns is Sa ga ma dha ni. This Raga has a pleasing pairing of the fourths or madhyam intervals (Sa - ma, ga - dha and ma - ni). Using these pairings and the symmetry in the Raga makes this a particularly beautiful melody. This Raga is also popularly known as Hindolam (not to be confused with Raga Hindol) in the South of India.

In this presentation of Raga Malkauns on Chandraveena, I explore the Raga in Alap, Jod and Jhala, followed by a Composition in Chautala (12 beats). I am privileged to be accompanied by Shri Sanjay Agle for the Pallavi session.

Shri Sanjay Agle is a master Pakhawaj player coming from a family and tradition of Pakhawaj players. His grandfather Ambadas Agle was a legendary pakhawaj player in the royal court of Indore. Sanjay Agle learnt from his father Kalidas Agle, and another renowned pakhawaj player Swami Pagaldas. I also had the pleasure of sitting down and chatting with him about his instrument and his craft. You can check out the interview by following the link.

Pallavi in Chautala in Raga Malkauns

Pallavi also known as Bandish, Gat, Kriti or composition is a melodic line (or lines) bound by a Tala or rhythmic cycle. In some cases, lyrics are set to a melody in the chosen Raga and Tala, whereas in other cases it is just a melodic line with no lyrical or literary meaning, called Swarajati or Gat. Many instrumental compositions use the latter format, to make the most of “playing” with the rhythm.

Purchase CD quality audio of the performance from https://chandraveena.bandcamp.com/album/raga-malkauns.

My conversation with Shri Sanjay Agle is available at https://youtu.be/ruZXeiy4BXo.

If you like the music, learn how you can support Chandraveena music. We value your patronage.
Previous
◀︎ Raga Hamsadhwani - Raga of the North and South
Next
Raga Durga - An Oriental Pentatonic ►
Share via