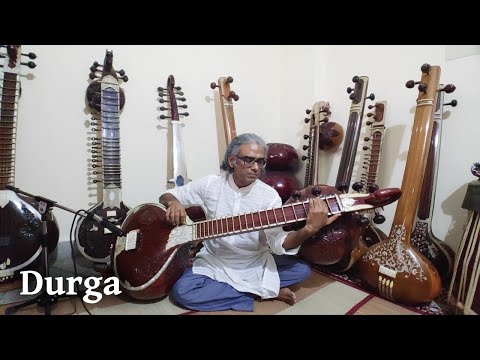 Raga Durga is very popular in Indian music. It has an audhava or a pentatonic scale. This scale is also found in traditional music of Chinese and Japanese origin. It is also known as Raga Shuddha Saveri in the Carnatic tradition. An interesting aspect of this scale lies in the fact that every Murchhana (also known as Graha Bheda or scale change) gives rise to another well known pentatonic scale. We encountered this earlier in the case of Raga Bhoopali. Raga Durga showed up as the third Graha Bheda of Raga Bhoopali. Thus, the set of Ragas Bhoopali, Madhmad, Malkauns, Durga and Dhani are mutually related through Graha Bheda. Take a look at the article on Raga Bhoopali for more information.

A Raga by any other name would sound as good!

Given the long history of Indian Classical music with multiple threads of evolution, the names of Ragas can often be confusing. I find the name, Shuddha Saveri, somewhat confusing.

Let me explain what I mean. In the Carnatic system of naming Swaras, the lowest position of a note in the 12 note scale is denoted as a Shuddha note. Now what that means is Shuddha Re means the lowest re or komal re. Now, there is a scale called Saveri whose Swaras are Sa re ma Pa dha SA Ni dha Pa ma Ga re Sa. As you can see, this scale already has the lowest re and dha or the Shuddha re and Shuddha dha.

Let me add some more confusion to this. There is a Raga called Karnataka Shuddha Saveri, which is called Shuddha Saveri according to the Dikshitar school of music, with the notes Sa re ma Pa dha SA dha pa ma re Sa. This seems to be consistent with the convention of note nomenclature, but resembles Saveri rather than the currently titled Shuddha Saveri.

Regardless of the name, Raga Durga is a beautiful Raga. The use of the consonant pairing of Sa-ma, Re-Pa and ma-Dha makes this Raga very beautiful.

Purchase CD quality audio of the performance from https://chandraveena.bandcamp.com/album/raga-durga.

If you like the music, learn how you can support Chandraveena music. We value your patronage.
Previous
◀︎ Raga Malkauns - The Calming Melody
Next
Raga Alapana in Raga Bilaskhani Todi ►
Share via