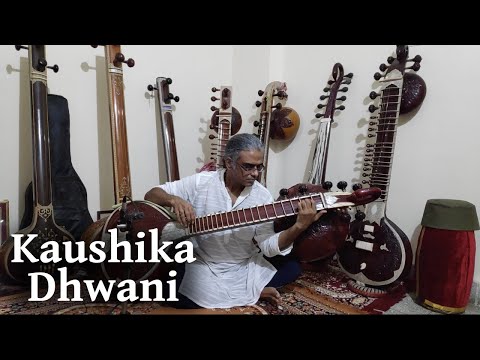 Over the centuries, the Indian Raga system has always been associated with nature. There are seasonal Ragas like Malhar for the monsoon and Basant for spring. Then there are Ragas associated with specific time periods (or Prahars) of the day and the night, based on the movement of the sun and the moon. For example, Ragas Todi and Bhairav for early morning, Ragas Puriya or Yaman for late evening, and Ragas Bageshri or Kanada for the night.

Raga Kaushika Dhwani gives a feeling of spring time with leaves rustling, birds chirping and so on. In the same spirit, this recording was done in spring. You may hear birds chirping, a cuckoo (Koel) calling, maybe the sound of leaves in the wind and and an occasional dog barking!

Let us first look at the basic scale of the Raga. Please refer to the Program Notes below for the notation.

I present a Raga Alapana in three parts - Alap, Jod and Jhala also known as Alapana and Tanam. In this presentation of Raga Kaushika Dhwani on Chandraveena, I have made use of Tivra Rishabh (Re) in an Alpatva fashion (subtle and sparing use).

Raga Kaushika Dhwani is also known by several other names, a notable one being Bhinna Shadaj or Bhinna Shadja. This is actually one of the few legacy names which represent scales from the historical Jati-Murchhana system of Indian Classical music. Through this system, many jatis (modern day Raga equivalents) were created, and several have survived as modern Ragas.

Now, whether Raga Kaushika Dhwani and Bhinna Shadaj as described by the revered musicologist Sarang Dev in his treatise Sangeet Ratnakar are the same or different, we will tackle that discussion on another occasion.

The full video recording of this performance is available at https://youtu.be/6ND_ztFyiFQ.

Purchase CD quality audio of the performance from https://chandraveena.bandcamp.com/album/raga-kaushika-dhwani.

If you like the music, learn how you can support Chandraveena music. We value your patronage.
Previous
◀︎ Raga Bilaskhani Todi - a tribute to Tansen!
Next
Raga Gurjari Todi - a jod Raga? ►
Share via