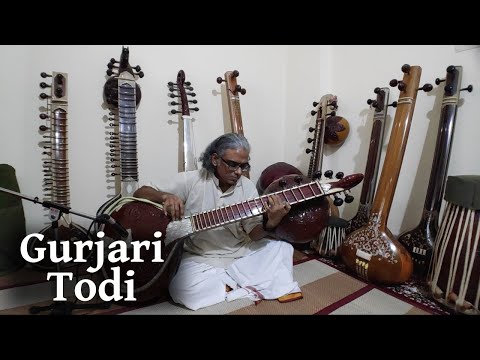 Over the centuries, the Indian Raga system has evolved from different sources. Some Ragas have evolved out of modes or Murchhanas of a more basic scale. Today, we refer to such Ragas as a product of the Jati-Murchhana system. Some Ragas were inspired by folk tunes (e.g., Raga Kafi), while others evolved from regional melodies (e.g., Gowla, Saurashtra, etc). These Ragas were then formalised according to the Lakshanas and Lakshyas of Indian Classical music. One such regional melody is Raga Gurjari, which is mostly thought to have originated from the Gurjar community.

There are a number of Raga classification systems described in Indian scriptures. One of them is the Mela-Janya system which classified Ragas as parent Ragas (Mela) and their derivatives (Janya). Another system is the Raga-Ragini system which groups Ragas as masculine (Raga) and their feminine counterparts (Ragini). According to 17th century literature, specifically, Sangita Saramrta and Raga Lakshanamu, Raga Gurjari is a Janya of the Mela Malavagowla. According to the Raga-Ragini system, Raga Gurjari is considered a Ragini of Raga Bhairav. The scale of Malavagowla and Bhairav is the same. Refer to the Program Notes below for the notation.

Now, the scale of Raga Gurjari Todi is:

To understand this better, we need to recognize that Todi is characterised by a very flat re and ga, what we call atikomalatama svar. Based on the Samvaad principle of Indian music, this would entail the corresponding fifths to be very flat. Thus, in Shuddha Todi, dha is very flat. Besides, Pa is already Alpatva (sparingly used). In contrast, in Bhairav, dha is a sharper note with a matching sharper re as well. Further, dha is often played as andolita (shaken or oscillated).

Gurjari Todi retains this aspect of Bhairav which raises the pitch of re and dha, compared to Shuddha Todi. This also forces ga to be a bit sharper as well. As a keen enthusiast of Indian Classical music, you may notice this in the playing. While this differentiates it from Shuddha Todi, it still retains a dominant feeling of Todi more than Bhairav, mostly because of the ga - Ma - Ni triad.

Thus, it is more accurate to say that Raga Gurjari Todi is a mixture of Raga Gurjari and Raga Shuddha Todi. This is what we call a Jod Raga, a mixture of two scales. This is also a Pancham Varjit (fifth dropped) shadav (hexatonic) scale.

I present a Raga Alapana in Raga Gurjari Todi on Chandraveena. Note the unusual Tanpura tuning for this recording. It may bother you or push you out of your comfort zone, and yet, it will match and merge with the Raga Gurjari Todi being played. Hope you enjoy the music.

The full video recording of this performance is available at https://youtu.be/—OO6cP8cO4.

Purchase CD quality audio of the performance from https://chandraveena.bandcamp.com/album/indian-classical-raga-gurjari-todi.

If you like the music, learn how you can support Chandraveena music. We value your patronage.
Previous
◀︎ Raga Kaushika Dhwani - a spring time Raga?
Next
Raga Shankarabharanam - Raga of the dancing Lord Shiva! ►
Share via